I have Christmas on the brain. In a huge way. Visions of stockings, presents and reindeer dance through my head. I found myself singing Christmas carols in the shower this morning.

I don't know what my problem is. Forgive me Fall, for I have skipped over you completely and wished for snow and Christmas cookies.

To combat this problem and get myself in the Fall spirit, I am now going to post a few fall items that caught my eye recently. Because I can't be posting Christmas stuff yet. yet...

Fabulous Fall Finds
(you can find all of these and more on my Pintrest boards.)

I didn't post our CSA love last week because I forgot to take a picture before I divvied it up (we split with another person). Well guess what? I forgot this week too!

But I will forge ahead without a picture. I hope you'll forgive me.

Last week's delivery was pretty much the same. With the addition of a giant jar of beautiful, glorious, amazing HONEY. So good. So, so good.

Email ThisBlogThis!Share to TwitterShare to FacebookShare to Pinterest
Labels: CSA

Remember the first few weeks of our CSA delivery when the box was pretty sparse?

Yeah, those days are behind us. This week's box was chock full of goodness. 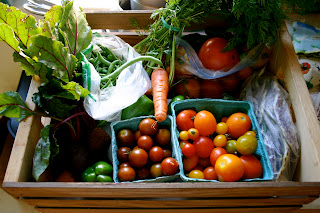 This week's delivery included:
Tomatoes, tomatoes and more tomatoes. Red, yellow, orange and green. Lots of salsa and tomato soup in our future (and freezer!).
Peppers. Sweet and hot.
Beans. Green, purple and the creepy purple stripey ones.
Cucumbers. Mmmm....pickles.
Carrots.  Fresh carrots are the bees knees.
Swiss Chard. The rainbow variety. So good. I will be making a giant pot of Sausage and Greens Soup tomorrow. Can't wait!
Summer squash. We've been tossing these bad boys on the grill with a splash of olive oil and S&P. yum.
And last but not least....BEETS!!! For a girl who used to hate beets, I am so excited to see them this week! I LOVE BEETS! (I should get myself a bumper sticker) 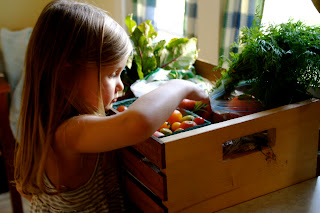 Email ThisBlogThis!Share to TwitterShare to FacebookShare to Pinterest
Labels: CSA

Me + Heely's = Recipe for disaster

A month or so ago I was hooked up with a free pair of Heely's thanks to a blogging campaign via Business 2 Blogger. They were looking for bloggers who were interested in trying Heely's and I thought, what the heck, why not make an absolute fool out of myself on the internet! Woo hoo!

I don't know about you, but when I think of Heely's, I think of tweens zooming around the mall (aka "heeling"), not adults. But lo and behold, Heely's come in Men's and Women's sizes too. Just think of all the family skating you could do! Your kids will LOVE it! Or not. They might be mortally embarrassed but at least you'll have fun in the process. 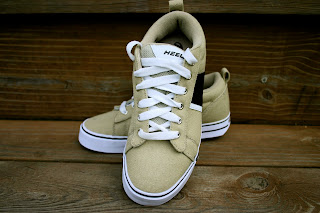 The shoe I received is tan canvas with a dark brown accent. You can pop the wheel in and out making the shoes very versatile. And remember, there is a time to heel and there is a time not to heel. Playing outside with the fam? Time to heel. Dashing through Target while wearing your baby in the Ergo? Not the time to heel. Although it would make those shopping trips so much quicker. But, not so safe. Basically, use common sense as to when the appropriate time to heel is.

Once I received my Heely's I have to admit, I was a bit apprehensive. I was having second thoughts. I am about as graceful as a giraffe on a slip slide (why a giraffe would be on a slip and slide, I don't know). But really, I had no choice. I had said I would do it, so there was no turning back now. So I slipped them on and away I went! 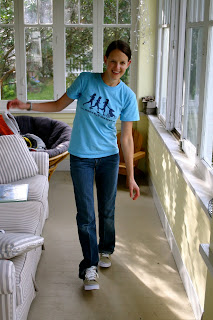 (A shout out to Moms RUN This Town!) (And yes, I am skating on my porch. It was raining!)

Well kind of. It took quite a bit of practice and almost falling on my face before I was able to skate a short distance. And I only made a minimal fool of myself. Ok, a big fool. Not gonna lie, it's harder than it looks. But once I got comfortable with rocking back onto my heel to skate it was a lot of fun! My husband only laughed at me once. Or twice. Or maybe I told him to go inside and leave me alone (I think he's jealous). The how-to videos on the Heely's website were a big help in getting me started.

The Heely's website has some great info on safe skating as well as instructional videos for basic skating and trick skating. If I were a tad more coordinated, I would so try some of the tricks. But alas, I am not, so I will stick to basic skating. Still very fun!

All in all, I had a lot of fun playing around with my Heely's. I never would have thought they had options for adults, so it was great to try them out first hand. They would make a great gift for the budding skater or skater wanna-be in your life.

Disclaimer: I received a pair of Heelys Wheeled Shoes for free in conjunction with Business2Blogger for the purposes of trying them out for this review. That being said, this review is my 100% honest opinion of this product - I  was not paid for my reviews or opinions.

Ten years ago I was in my second year of college. Staying up all night and rarely going to class. Living in the first of many rental houses. Sleeping off hangovers and eating frozen pizza on the kitchen floor with my roommates.

Today, I am married with two children. We own a house, a dog and a mini van. I am up all night with a baby who thinks sleeping through the night is overrated.


Ten years ago I woke up late and ran out the door for class, American Lit II.


Today, I woke up early, got myself ready and then the girls, and raced out the door for the first day of Sunday school.

Ten years ago I heard a guy on the radio say that a plane had crashed into the World Trade Center in New York. I thought he was joking.


Today, I didn't hear the guy on the radio talking because I was too busy answering the million questions a three year old can throw at you in a 9 minute car ride.


Ten years ago I walked into my classroom and the buzz of conversation. Plane crash, attack, New York City, terrorist were all I could make out. Chaos ensued as we gathered around the nearest TV.

Today, I walked into a classroom and the buzz of preschoolers, singing and snack. A different kind of chaos ensued.


Ten years ago my heart raced and my stomach sank as I watched the footage of the plane crashes and realized it was not a joke.


Today, my heart swelled with pride as I watched my girls play with their friends and sing songs of love.

Ten years ago I started to panic as I realized my mom was in New York City. And there was a plane crash. An attack. And I didn't know where she was.


Today, I calmed my panicking three year old and told her that yes, Grandma would love to walk to the coffee shop with us later this week and no, she won't be at the cabin forever.

Ten years ago I hit redial over and over and over again, willing my mom to answer her cell phone. Panicking a little more whenever my phone rang and it wasn't her. When she finally called me later that morning to tell me she was ok (and across the river in Newark for business training), I sat down and cried tears of relief.

Today, I plan on calling my mom to tell her I am thinking of her but first I have to put someone down for nap,start a load of laundry and make lunch. If I don't get to it today, I know I can tomorrow.


I cry tears of sadness as I think back on that horrific day. But I also cry tears of gratitude. I was lucky. I received an "I'm ok" phone call. Thinking of all the people who didn't and never would, breaks my heart.

While I am different person now than I was ten years ago, I will never forget the thoughts, feelings and horror of September 11, 2001.